You’re a new vampire and it’s not quite as straightforward as you imagined. Maybe you’re struggling to accept your new form, or maybe your feeding habits are testing your roommates’ patience—it’s not your fault that you have to keep a bag of blood in the freezer! Perhaps you’ve tried to talk to your living friends about it; while they’re kind and sympathetic, there are some things they just don’t get.

In your search for help, you’ve stumbled across VAMP CAMP, a local support group for vampires and the only one in your area. In this game for 2-6 players, you’re going to attend your first VAMP CAMP meeting. You’re not sure what to expect but at this point, you’ve got nothing to lose.

This game is GMless by default, though there are alternate rules included if you prefer to play with a facilitator. Players take turns reading and responding to prompts about their experience as vampires. If you don't have your own ideas, you can use the roll tables provided to choose or randomly determine them.

This game comes with:

Please note that safety tools are mandatory for this game. The game rules include information on how to use them, as well as a link to the  TTRPG Safety Toolkit.

This game was written for #BIPOCVampJam  2021. As such, you play as a vampire of colour. I'm a designer of colour who wrote this game to invite other BIPOC to explore vampirism without the stereotypical constraints prevalent in white vampire traditions. Please play the game with this intention in mind.


What are  people saying about VAMP CAMP?

"The discussion prompts are an excellent jumping off point for improv and guide your conversation from problems to solutions. It's a wonderful narrative game that gives you a framework, points you in a direction, and lets you go, which is perfect both for veteran roleplayers and those looking for more practice. Give yourself some space to go off on tangents and see where the conversation takes you."

"While it's a short game, half of the first page is dedicated to player safety. This layout is so clean and Sebastian has fit so much on the page without it being cluttered."

"Check out another wonderful character-driven game by our very own Sebastian Yūe! Originally written for BIPOC Vamp Jam, VAMP CAMP is a GMless game for 2-6 players that explores moving through the world as a vampire of color and making friends who help you to feel alive. It's perfect for an end-of-October gathering with your friends, so take a look!"

In order to download this game you must purchase it at or above the minimum price of $4.95 USD. You will get access to the following files:

Support this game at or above a special price point to receive something exclusive.

If you’re in need and can’t afford to buy the game, please help yourself to a community copy.

Every sale contributes to the pool (13 provided to start). Anyone who pays over the minimum price of $4.95 adds two more copies.

Please review, rate, leave a comment and share links to the game with others as a way to help me out for free. Thank you!

"I'm a designer of colour who wrote this game to invite other BIPOC to explore vampirism without the stereotypical constraints prevalent in white vampire traditions. Please play the game with this intention in mind."

Seriously?  Don't you think that people who give you money for your game should be able to play it any way they want?  If you want to tell people how they should play the game, you should be giving it away for free.  Once you accept money for it, it's not your game anymore.  It belongs to the person who paid for it.

However, beyond that complaint, I do think a game focusing on bipoc vampires is a really cool idea so I'm not being totally critical.

I included that line as a request, not a rule, because I know that people will play this game however they like. I wrote that statement to express my intentions with its design and ask that they be taken into account—nothing more, nothing less. As with any polite request made by someone who lives in your computer screen, you are free to ignore it without fear of retribution.

Even so, telling people how to play the game is inherent to games as a medium. Games are what they are because of the rules by which participants agree to abide.

Also, I am giving it away for free; that's what the Community Copies are for.

Thank you for expressing your support, though I admit this is a rather odd way of doing so.

Hello. I was wondering if there is a community copy available? Please let me know. Thank you. 😊

Thanks so much for reaching out! I have added more :) 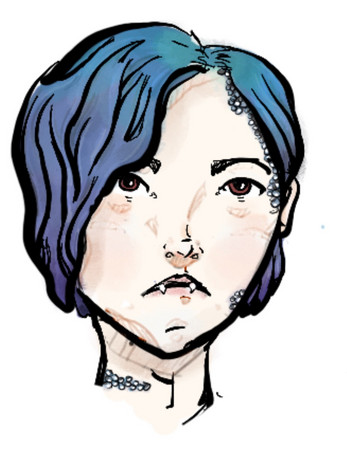 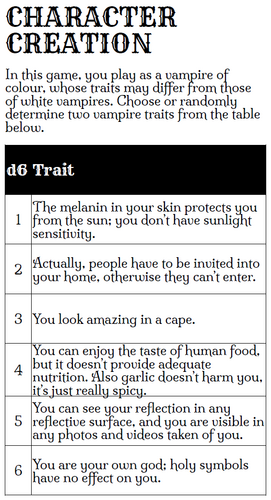